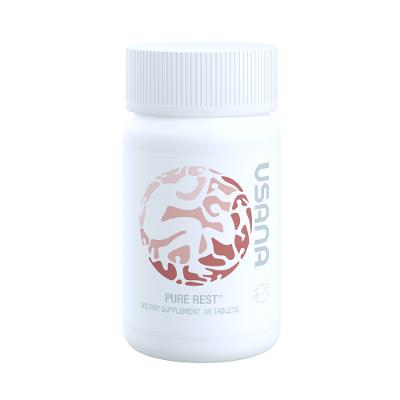 Since using USANA vitamins, minerals and supplements I have felt like a completely different person on and off the field. I am excited to join the USANA team on my Road to Tokyo as I know they will help me reach new heights as an athlete! My favorite product has to be the Pure Rest. I now start each day with more energy and drive knowing I got a good nights sleep, ready to attack the day and be the best athlete I can be.

Since using USANA vitamins, minerals and supplements I have felt like a completely different person on and off the field. I am excited to join the USANA team on my Road to Tokyo as I know they will help me reach new heights as an athlete! My favorite product has to be the Pure Rest. I now start each day with more energy and drive knowing I got a good nights sleep, ready to attack the day and be the best athlete I can be.

Nick has a mild form of Cerebral Palsy.

Ever since he can remember, Nick has had a numbing feeling along the left side of his body. Growing up, he always knew something was “wrong”, but when he mentioned it to his teachers, doctors, coaches, and even his own parents, no one believed him. He was always told what he was experiencing was normal and decided to keep his head down, hold onto that chip on his shoulder, and keep it a secret for as long as he could, while proving to those around him what knew all along, that he could continue to play soccer at the highest level, even without the use of his left side.

“Throughout my entire childhood, no one understood me when I would express that my norm was different from those around me.  My doctors and family were unaware of the numbness and side effects I was experiencing until we later learned that it was the result of a stroke that occurred in utero. In 2010, I suffered a grand mal seizure, biting through both sides of my tongue and was rushed to the hospital for tests and scans, which ultimately led to the discovery of a dead spot on the right side of my brain. All the dots started to connect from the symptoms I had experienced earlier in my childhood. I was finally given an explanation for my norm. The stroke created the dead spot which is responsible for the lack of feeling, motor movement, and sensation mainly in my left arm, hand, and leg. It was then that I was formally diagnosed with Cerebral Palsy.”

Nick was told he would NEVER play soccer again.  He knew in his heart that he could not accept the idea of his dreams and his soccer career ending, as he had already come so far. He was sidelined for nearly 6 months from the game but was determined to continue to pursue his love of the beautiful game. He went on to compete at the highest level, from the top clubs in Northern Virginia, becoming a State Cup Champion, to representing his home state of Virginia with the Olympic Development Program (ODP).  He then became a member of the DC United Soccer Academy for 2 years and played Division 1 soccer at Radford University for 4 years, winning the Big South Championship twice, and being named Big South Champion three times, as well as appearing in two NCAA Tournaments.

He has since had the honor of representing the USA as a standout member of the US Para 7-A-Side National Soccer Team.  Since joining the team in 2017, he has participated in 4 major competitions and has played in six different countries, all while scoring 34 goals in 25 appearances, to date. This year he quickly became the world's No. 4 ranked USPNT’s focal threat within its reinvented offensive scheme. His prowess in the central and attacking third proved to be overwhelming for the USA’s competition as he tallied 11 goals in only five games and an amazing 5 goals in one game to add to the historic run for the USPNT at the World Cup in Spain. Nick scored the thrilling, last-minute game-winner against perennial powerhouse Iran, enabling the U.S. to be the first squad to beat Iran outside the top two ranked teams in the world. He not only led the team in goals at the World Cup, as the USPNT finished first in the group stage for the first time in the program’s history but also proved his unselfish creativity by providing an equal number of assists (11) to his teammates.

Nick continued to be an imminent threat in the USPNT’s second historic run of the year at the 2019 Lima Para Pan American Games as he finished second in the tournament with 8 goals in six games. He was instrumental in the USA earning the Bronze Medal – the USA’s first medal in the program’s history.  After scoring against Brazil, in an unbelievable come-from-behind victory against the powerful South American opponent, he helped secure the USPNT’s place in the medal round. Nick proved to be one of the most dangerous 7-a-side players in the world and looks to be a fixture within the team’s continued success for years to come. In both 2018 & 2019 Nick was nominated for POTY, in 2019 Nick was voted the U.S Soccer Player of the Year with a Disability Award. Click HERE to read the full story!

Now, Nick has turned to training full time. Early this year, he was recruited to run Track & Field for his country. He is nationally classified as a T37. Along with his soccer training, he is also focused on the 2020 T&F season and has set his sites on making Team USA and qualifying for the 2020 Paralympic Games in Tokyo. In his free time, he takes advantage of his Public Speaking opportunities and enjoys giving motivational speeches at schools and local sports clubs. Nick is always looking for ways to share his story in hopes of inspiring and motivating young people to believe in themselves and their capabilities, no matter the circumstance. His determination, resiliency, and perseverance proved that he was not going to let Cerebral Palsy prevent him from chasing his dreams and doing what he has done his entire life - proving people wrong with a ball at his feet.  Now, his story continues…